Robert Frost and Carl Sandberg are two great American writers who have left a legacy for generations to follow. Many institutions across the globe have added their works to the course syllabus. The poems selected here for analysis have gained universal acclaim due to similar ideas in them. However, the question is, what is the main similarity between “Fog” and Frost’s poem “Mending Wall”? To answer this question, one needs a deep insight into both poems. The short analysis of the poems is as follows. 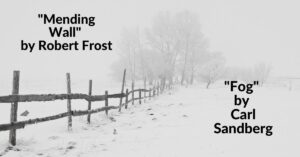 “Mending Wall” is written by the celebrated American poet, Robert Frost. This beautiful poem presents us with two neighbors sharing a varied stance for having boundaries in relationships. Every year, the two come across each other in spring to mend the wall that separates their lawns. Surprisingly, the speaker is against this separation; he believes in unity and togetherness. And, this surprise led him to asks his neighbor about having a wall of separation.

Unfortunately, he does not get any satisfactory answer. As the poem goes on, the speaker says that the falling of stones suggests that even nature is against this unreasonable activity. But, on the other hand, his neighbor shares a lasting attachment with this tradition and justifies his stance. To him, to develop lasting bonds, one needs to have boundaries and limitations.

“The Fog” by Carl Sandberg

The fog by Carl Sandberg, an iconic American author, is a symbolic poem. The poem presents a stark comparison between fog and the cat. It categorizes the fog as a graceful cat that hangs over a city. The clever and amusing comparison allows the reader to celebrate the little natural happenings. This short yet meaningful poem emphasizes the natural beauty that constantly amazes us with its different shades.

After analysing both poem the following similarities can be traced.

The main similarity that exists between the two poems is that both exhibit natural beauty. Carl Sandberg and Robert Frost have displayed their infinite and unbound attachment to the natural world. To them, nature has its own way of amusing people.