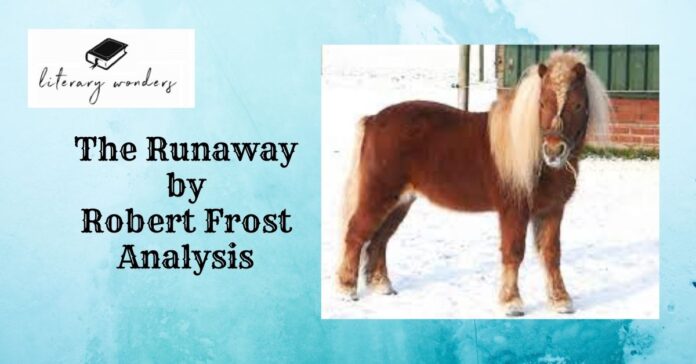 The article, The Runaway by Robert Frost analysis will unveil the deeper meanings of the poem. “The Runaway” is a metaphorical poem that talks about man’s nature. Using animal imagery, the poem highlights the shortcomings of human beings like how do we react when we confront an odd situation. The poem begins with the description of the place, when speaker and his fellow travelers are witnessing the first snow of the year in a pasture.

Although the pasture looks captivating, fascinating and enchanting, yet the presence of a lonely bolt in that extreme weather triggers the crew. The speaker expresses his great surprise upon finding a lonely horse in the middle of the valley. At first, the animal seemed friendly, but as soon as he saw people around, he started to bolt. His sudden rush adds more to their surprise; the speaker assumes that the poor creature is afraid of snow. Perhaps he is not trained to survive in the snowy weather. Therefore, the arrival of snow is not delightful to the horse. Instead, it has created a difficult situation for him.

The speaker wonders to find him alone; he begins to think about his mother, who left him in the middle of chaos. As the poem continues, the horse again appears with the same panic that led the writer to think of other creatures. He is amazed that all other animals are safe while this horse is left alone. He thought to himself that unlike other animals, this poor horse should also be taken to a safe and comfortable place.

Major Themes in The Runaway by Robert Frost

Man versus nature, loneliness, distress, and worry are significant themes spotted in the poem. Keeping the horse in the center, the writer comments on man’s nature. Through this poem, he tries to reflect the weak part of humanity, like when they face difficult situations, they try to run for solutions blindly.

The colt he sees in the mountain pasture fails to react appropriately because he is not trained. He is never told how to handle different weather shifts. As a result, when he witnesses the first snow, he tries to run to a better place but cannot find one because he does not know how to do so. The speaker feels that it was cruel and irresponsible on the owner’s part to let the cold alone in harsh weather. In comparison, the other animals are kept in their shelters.

Thus, the poet and his companions decide to look for his owner so that the cold can return to his safe place. Although he set off to find the colt’s owner, yet he failed to hide his distress; he seems shaken by the unsympathetic and carefree attitude of the owner. Through this simple poem, the writer urges pet lovers to take proper care of their pets and never leave them unattended.

Techniques Used in The Runaway by Robert Frost

Unlike other poets and writers, Robert Frost has also used poetic and literary devices in the poem to make it worth read. The analysis of the techniques used in this poem has been given below.