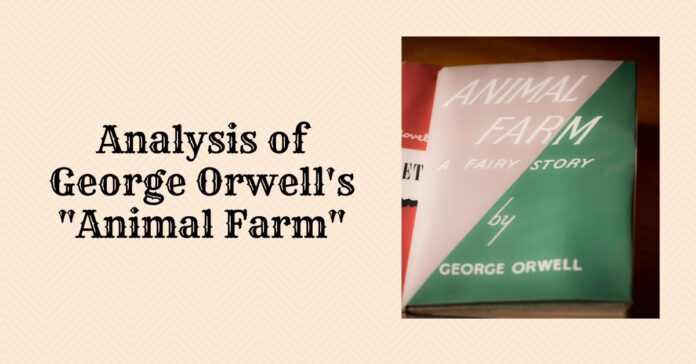 “Animal Farm” is a novel by George Orwell, published in 1945. It is a satirical allegory of the Russian Revolution and the rise of the Soviet Union. The novel is set on a farm, where the animals revolt against their human owner and take over the running of the farm themselves. However, as time goes on, the pigs, who have taken control of the farm, become more and more like their former human owners, leading to corruption and abuse of power. The novel critiques totalitarianism and the dangers of having unchecked power in the hands of a few.

George Orwell’s novel, “Animal Farm” is a classic portrayal of the dangers of totalitarianism. The novel is an allegory, using animals on a farm as characters to depict the rise of the Soviet Union and the emergence of the dictatorial regime of Joseph Stalin. Through the character of the pig Napoleon, Orwell shows how a leader can manipulate language and use propaganda to control and deceive the masses.

The novel begins on a Manor Farm, where the animals are mistreated by their human owner, Mr. Jones. The pigs, considered the most intelligent animals on the farm, devise a plan to overthrow Mr. Jones and take control of the farm. They inspire the other animals to join them in the rebellion, and eventually, they succeed in driving Mr. Jones away.

The pigs, now the farm leaders, established a set of rules called the Seven Commandments. The first commandment is: “All animals are equal.” However, as the pigs begin to assert their control over the other animals, they gradually start to violate this principle. They begin to live in the farmhouse and drink alcohol, activities that are forbidden to the other animals.

One of the pigs, Napoleon, becomes increasingly ruthless in his pursuit of power. He uses propaganda and manipulation to gain the support of the other animals, and eventually, he becomes the sole ruler of the farm. He changes the Seven Commandments to suit his own purposes and creates a cult of personality around himself.

Under Napoleon’s rule, the animals on the farm face increasing hardship and oppression. They are forced to work long hours and are given very little food. As a result, the pigs, who have become indistinguishable from the humans they once rebelled against, live a life of luxury while the other animals suffer.

In the end, the pigs’ manipulation of language and their use of propaganda to control the other animals leads to the betrayal of the revolution and the ultimate defeat of the animal community. The novel ends with the pigs, who have become just like Mr. Jones, sitting in the farmhouse and drinking alcohol with their human neighbors, showing how the pigs have become indistinguishable from the humans they once rebelled against.

One of the central themes of “Animal Farm” is the corrupting nature of power. As the pigs rise to leadership positions and start to wield more control over the other animals, they become increasingly tyrannical and manipulative. They use their superior intelligence and cunning to exploit the other animals for their own gain and gradually transform from being champions of the revolution to being ruthless dictators.

Another major theme of the novel is that revolutions can easily be co-opted by those who seek to use them for their own gain. The pigs’ rise to power is initially presented as a revolution against the tyrannical rule of Mr. Jones, but it quickly becomes apparent that they are no better than the humans they have overthrown.

The other animals are initially enthusiastic about the changes brought about by the revolution, but they are gradually disillusioned as they realize that the pigs have become just as oppressive as the humans they overthrew.

One of Orwell’s finest works, Animal Farm (1945) is a political fable based on the events of Russia’s Bolshevik revolution and the betrayal of the cause by Joseph Stalin. The book concerns a group of barnyard animals who overthrow and chase off their exploitative human masters and set up an egalitarian society of their own.

One of the main ways the pigs can maintain their power over the other animals is by controlling the way they think. They use propaganda and manipulation to convince the other animals that they act in their best interests. They exploit the animals’ lack of education and critical thinking skills to maintain their hold on power. The novel suggests that education and critical thinking are essential tools for individuals to resist being controlled by those in power.

Another key theme of the novel is the dangers of blindly following leaders without question. The other animals are initially eager to follow the pigs’ leadership, but they gradually become disillusioned as they realize that they are only interested in their own power and self-enrichment. The novel suggests that it is essential for individuals to think critically and not simply accept the words of their leaders without question.

In “Animal Farm”, George Orwell uses several literary techniques to convey the themes and messages of the novel.

Overall, Orwell’s use of these literary techniques helps to convey the novel’s themes and messages in a clear and effective way.

To conclude, “Animal Farm” is a satirical novel by George Orwell that tells the story of a group of farm animals who overthrow their human owner and create their own society. Initially, the animals envision a utopian society where they are equal and live in harmony. However, as time goes on, the pigs, who have taken on the role of leaders, become corrupt and begin to exploit the other animals for their own gain.

Through the character of Napoleon, Orwell shows how a leader can use propaganda and manipulation to control the masses and maintain their power. The novel serves as a warning against the dangers of blindly following a leader, and it reminds readers of the importance of standing up for what is right and just, even in the face of oppression.

“The Love Song of J. Alfred Prufrock” by T.S Eliot