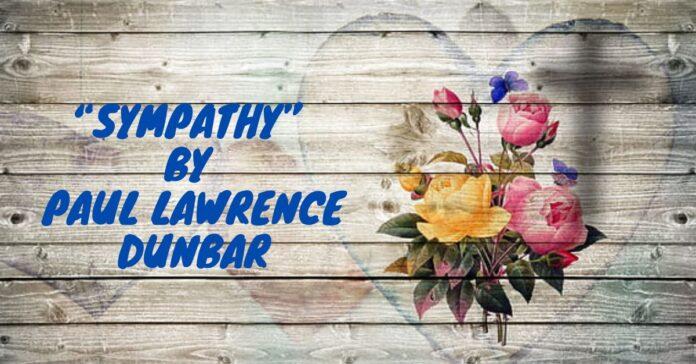 “Sympathy” by Paul Lawrence Dunbar is a symbolic poem that presents a stark comparison between cruel slavery versus joyous freedom. Dunbar published this thought-provoking piece in 1899. He highlighted the grave problems of African Americans like racial aggregation, slavery, and social discrimination. Using the bird as a metaphor, Dunbar shows the joy of freedom on the one hand. On the other hand, the captivated bird shows the struggle and plea of the African Americans that how the world gives the cold shoulder to their demands and rights.

The beginning of the poem introduces us to a natural setting where the sun is shining, the birds are chirping, and the river flows in a set direction. Unfortunately, the caged bird feels dejected. His constant suffering and misery lead him to protest against the unjust system of the ruling elites. However, his protest does not make any difference to the world. It only adds more sorrow to his life. He helplessly bashes himself against the bars and gets badly wounded. Times passed, his wounds turned into scars, but he did not get freedom. However, he does not lose hope despite facing cruelty, aggregation, and discrimination. Instead, he starts singing for the happy days. The speaker says that he understands the misery of the captivated bird. He laments his poor condition, but can do nothing for him.

The poem’s central themes include the catastrophic life of the captured people, discrimination, and suffering. Using bird both as a metaphor and symbol, the writer presents us with the woeful and grievous life of a bird who is imprisoned. He is dying slowly in his cage while other birds enjoy the bliss of natural life. He also wants to perch and cling with his fellow birds, but he is made to suffer by the cruel master. The birds represent the sufferings, distress, and troubled life of the blacks. Although they share the same human characteristics, yet they are subjugated due to the color of their skin. The world treats them as inferior; they wail about the unjust treatment, but no one bothers.

The speaker claims that he knows their cause of distress; he knows what they grieve for, but he can’t set them free; he can’t assist them towards a better life. Dunbar uses absorbing and vivid images to show how their wounds have turned into scars. Their bruised bodies are the mouthpiece of injustices they have endured through ages. However, despite knowing the actual cause of their distress, the world gives them the cold shoulder. Amid this chaos and insanity, the blacks pray to God for freedom. They make God witness this torture and ask for a better life.

Analysis of Literary and Poetic Devices

Paul Lawrence Dunbar has used many literary and poetic devices in Sympathy to speak about the unfortunate situation of the blacks. The analysis of the devices used in the poem is as follows.