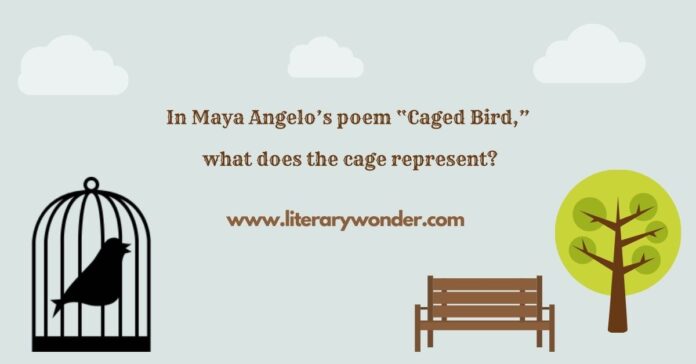 Are you searching for a satisfying answer to a question, In Maya Angelo’s poem “caged bird,” what does the cage represent? Then, you are at the right place as this article will unfold the symbolic representation of the cage in her poem.

A promising American writer, poet, and motivational speaker, Maya Angelou, has penned down this beautiful poem, “Caged Bird.” In this meaningful poem, she presented two contrasting ideas, using the analogy of birds. On a surface level, the poem presents two birds; one flaps his wings freely in the sky, while the other cries helplessly in his cage.  However, after examining the poem on a deeper level, the core issue hits the brain: What does the cage represent in “Caged Bird?”

To answer this question, one needs to shuffle the pages of history. First, we need to recall the time when the whites robbed and destroyed the beautiful land of Africa. Before their arrival, Africans had lived a promising life in this beautiful land enriched with natural bounties. However, once the white men in power invaded, they tried to control it using various tactics instead of accepting its distinct identity.

Meaningful Representation of the Cage

Therefore, In Maya Angelo’s poem “caged bird,” the cage represents misery, struggle, and discrimination Africans faced in the past. It also stands for confinement and oppression. The free bird symbolizes white Americans who are oblivious to their privilege and feel a sense of ownership over the world they move through. In contrast, the intergenerational trauma of slavery, segregation, systematic racism, and economic oppression have limited the freedom of captured bird.

Unfortunately, the captured bird does not possess even the basic necessities of life. He needs to wait for the commands of his master to breathe in the allocated area. He has no choice to choose anything for himself. On the other hand, the free bird lives a life of luxury. He enjoys his rights and liberty in full swing. He is free to move in any direction. If he felt discomfort with the breeze, he freely migrated to a place that suited him best.

Contrasting this liberty to misery, Maya Angelou details how even the dreams of captured birds have turned into nightmares because he loses hope of survival. His movement is restricted, and so is his progress. Yet, despite facing these troubles, he tries to sing his problems to the world outside. The poor bird tries to shake the cold world with his sobbing voice. The poor soul sings with a fearful trill, and his song hits the distant mountains. He does not desire to attain wealth or power; he simply wants to earn a free life. A life in which he has the liberty to walk freely on earth.

Thus, the cage in the poem represents the restrictions imposed upon the Africans by the mighty whites. Due to these unjust and unfair restrictions, Africans lost their special identity. The world treated them as inferiors and they faced a havoc due to their dark skin color. To represent the helplessness of her people, Maya Angelou has used cage as a symbol of confinement.

“Many Asked Me Not to Forget Them” by Naomi Shihab Nye